Don’t waste your time looking back on what you’ve lost. Move on, life is not meant to be traveled backwards.

As of late, Abraham has been moving into the “Go General” phase of their teachings. They are moving away from all the processes and into “The Emotional Grid”. The Emotional Scale was the way to go for the longest time and now they have simplified it so more people can understand and access their creative abilities.

“Do you know that if you can find seventeen seconds, seventeen seconds of a thought about something general (like an emotion), that that’s enough to get that grid active enough that it will bring something else to it right now? And that something else that it will bring to it right now is usually another thought that keeps it going longer. And if you can keep it going for another seventeen seconds that’s enough to bring something to it, and it’s usually another thought that will keep it going longer. And if you can keep that going for seventeen seventeen seventeen until you have sixty-eight seconds of non-diluted general pure emotional thought you’ve accomplished a grid that will bring you visible evidence. Someone will walk into your space with evidence, we are not kidding you. Something other than just a thought drifting into your mind; something will come as evidence that you have accomplished a point of attraction that is strong enough that the rendezvousing process has already begun.

And when you start deliberately rendezvousing first with your own thoughts, then with conversations with others, then with things like turning the television on at the perfect moment that something about that is said to you, or you open a book or you walk past a newsstand and something catches your attention as a headline or deep within an article of something. All kinds of things will begin occurring to you. Happening to you. And because you have deliberately worked on your grid, now as these things come you will not just see them as random, freakish coincidences, a coincidence is a rendezvousing of vibrational latitude, that’s what a coincidence is. It’s a cooperative, commutative incident. Coincidence is the best word we know that is talking about rendezvousing which is caused by law of attraction. But you thought it was random. And for most, it is random because you are not thinking deliberately; you are creating by default. But when you start deliberately seventeen seconds, not much to ask of yourself, is it? Seventeen seconds, it feels pretty good. And then another and then another and then another 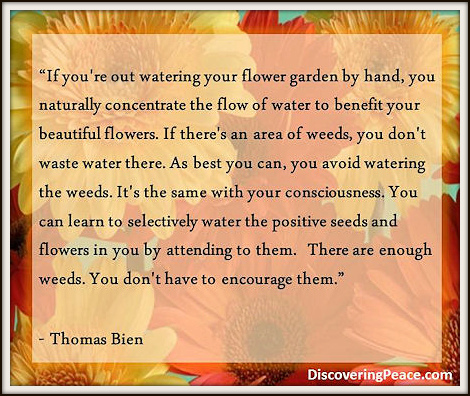 If you’re out watering your flower garden by hand, you naturally concentrate the flow of water to benefit your beautiful flowers. If there’s an area of weeds, you don’t waste water there. As best you can, you avoid watering the weeds. It’s the same with your consciousness. You can learn to selectively water the positive seeds and flowers in you by attending to them. There are enough weeds. You don’t have to encourage them.

Parents don’t want their children to make the wrong decisions, so they don’t allow them to make the decision. And then the child becomes dependent, and then the parent resents that, and it gets off into a blameful thing early on. If you are encouraging children to do all that they can do — and not squelching the natural eagerness that is within them, so that they can shine and thrive and show you and themselves how good they are at adapting to physical experience — then everyone wins.

We use cookies to ensure that we give you the best experience on our website. If you continue to use this site we will assume that you are happy with it.Ok